Increasingly there’s guidance being issued by the various regulators – General Medical Council, Nursing and Midwifery Council etc – on how health and social care professionals should behave on social networking sites. I’m a firm believer that professionals can and should use blogs, Twitter etc in order to facilitate dialogue between the people who work in and use services. I think so long as you follow a certain amount of common sense, it can be done in an ethical and responsible way.

This evening I’ve been watching various paramedics risking their registration by talking on Twitter in a way that could get them fired and hauled up before the Health Professions Council. Here’s a prime example of how not to do social networking.

[Edit: This post originally only blacked out the IDs of non-anonymous tweeters, and included some hyperlinks. After receiving an apology from one of the contributors, I’ve removed all the hyperlinks and blacked out all the Twitter IDs]

This morning, a paramedic tweeted:

There are some NHS workers who use anonymous profiles on Twitter to make Derogatory remarks regarding their patients & treatment. It’s vile.

The paramedic gives an example of the sort of thing he’s talking about.

He then got a series of tweets from other paramedics telling him this is “just venting” and he should “lighten up”. He also got replies like this:

Some of the people replying had profiles giving what I sincerely hope is not their real name. As you can see, those who’ve tweeted non-anonymously have had their IDs and profile pics blacked out – because I’m nice like that.

Well, sorry, but it’s not “just banter”, and the regulators are very clear about that. My own regulator, the Nursing and Midwifery Council, has been increasingly detailed in its guidance on social networking sites.

If you identify yourself as a nurse or midwife on Facebook, you should act responsibly at all times and uphold the reputation of your profession.

I tweeted to suggest that if people want to vent they should do it in private, and pointed out that the GMC, NMC etc are very clear on this. In all fairness to one user he retweeted my comment and asked to see the literature. I sent him the NMC guidance (paramedics are registered with the Health Professions Council, but I suspect the HPC would say the same things). I hope he reads it and takes note of it.

It didn’t take much browsing to discover that the same people were talking elsewhere in ways that could endanger their registrations. 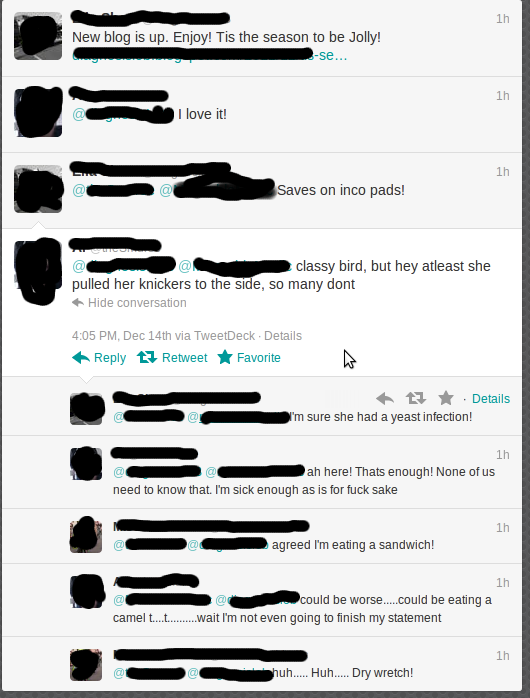 As you can see, with this screenshot I’ve blacked out not only IDs but also the blog link. That link gives the blogger’s name, the city they work in, and the following detail.

We established she had been drinking for 4 hours and had consumed red wine, white wine, beer, shots, shooters and shorts. Standard. We scooped her off the floor and walked / dragged her to the ambulance. She couldn’t walk on her own, her legs were bowing and collapsing under her weight with every step. It resembled the walk of a new born giraffe. We opened the door to the truck and she unceremoniously fell up the steps. She dragged herself to the bed and climbed up. Skirt rolling up to her hips displaying camel-toe for the world to see. It just screamed class.

That’s a summary dismissal and a Fitness to Practice hearing, right there.

Before I was running this blog, I was editor of a group blog called Mental Nurse. At the time when it went down the tubes in March 2011 it was one of the UK’s most popular health blogs. Pandora from Confessions of a Serial Insomniac gave us a lovely obituary, which gives an idea of how it attained that status.

Mental Nurse (MN) had a certain curiosity to it. It was written mainly by…well, by mental nurses (or trainee mental nurses), yet a substantial number of its readers were us lot, the patients. In this way, it was able to bring about a respectful and equal dialogue between these two often disconnected demographics. This was a forum where (in the main!) courteous and empathetic discussion and the swapping of ideas and stories took place, undoubtedly (a) improving the practice and client-understanding of the staff involved and (b) giving us patients a better idea of what goes on behind the closed doors of the offices of CMHTs and psychiatric wards/hospitals, coupled with the knowledge that not all mental health practitioners are ogres

One thing I learned from Mental Nurse was that so long you maintain certain parameters (don’t breach confidentiality, don’t get in touch with your own patients or former patients, don’t slag off co-workers or patients) then social networking can be used by professionals as a force for good.

It really isn’t complicated stuff. Be nice. Be responsible. Show you care about your job. Don’t talk about your patients’ camel-toes.

11 thoughts on “Health Professionals: How Not to Use Social Networks”

Error: Twitter did not respond. Please wait a few minutes and refresh this page.