In May 2016 we published the Unsafe Spaces report, which highlighted how under-regulation of counselling and psychotherapy allows people to practice in these fields even after being struck off for very serious misconduct. In July the report was discussed in Parliament.

A key case study in the report was Exeter-based Palace Gate Counselling Service. In 2014 this firm was struck off by the British Association for Counselling and Psychotherapy, after the owner/director was found to have made unwanted sexual advances towards two women during therapy sessions. The company simply ignored the striking-off and carried on as if nothing had happened. This caused alarm among local agencies and controversy in the media.

Palace Gate Counselling Service lease their premises from the Palace Gate Centre, which is owned by South Street Baptist Church, a member church of the South West Baptist Association and the Baptist Union of Great Britain. After the BACP struck the firm off, the church was approached, and the safeguarding issues raised by this ruling were highlighted.

In July 2014, the chaplain of the Palace Gate Centre gave this response,

Regarding safeguarding, South St Baptist Church takes this extremely seriously and has its own regularly updated safeguarding policy. In terms of the Palace Gate Centre, though, we are not responsible for safeguarding within the activities run by other groups/organisations who rent space in our building. We do ensure that any group working with children, young people or vulnerable adults in a Regulated Activity in our Centre is aware of their need for their own safeguarding policy and of their responsibility to implement it.

As the Palace Gate Counselling Service is not operated or controlled by the church, any issues to do with safeguarding lie with PGCS and not with us.

To a degree, fair enough, though expecting PGCS to address a safeguarding concern is pretty meaningless when the concerns are about the owner of the company. It’s also debatable that the church can say that a safeguarding issue is not their responsibility. As anyone who’s ever attended child protection or protection of vulnerable adults training will know, “nothing to do with me” is simply a statement you can’t say. Safeguarding issues are regarded as everybody’s business.

The legal advice we have been given tells us that the findings of the BACP do not provide any lawful grounds upon which the church could terminate its lease with Palace Gate Counselling. Indeed, if we did pursue such action it is possible that the church itself could be taken to court for acting prejudicially.

Okay, so their hands are tied. However concerning the BACP findings about Palace Gate may be, the church can’t evict them or they’d get sued.

So, South Street Baptist Church are simply reluctant landlords, stuck with a tenant they can’t get rid of.

But if that’s the case, why does the church continue to endorse this firm on their website? 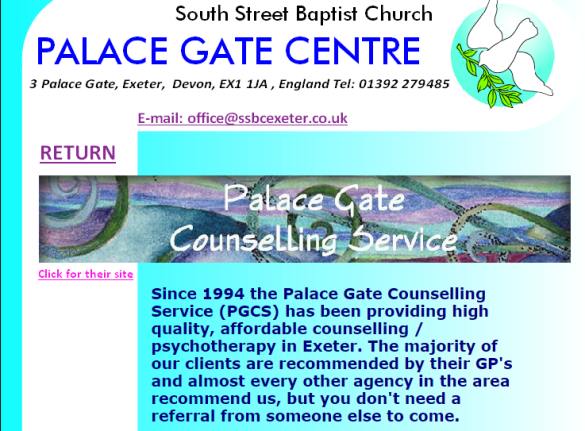 Incidentally, the claim that “almost every other agency in the area recommend us” is contradicted by reports we hear from the Exeter area. Multiple agencies in Exeter have blacklisted PGCS due to the safeguarding concerns. I have no information as to whether they’re still getting referrals from GPs, but I sincerely hope not.

What shocks me is that this church knows that people have been harmed while attending this so-called counselling service. A finding of fact was made by a professional body, the BACP. The case has been in the national media. Their chaplain confirmed they know about it, but simply insisted they can’t do anything about it.

As it turns out, they are indeed doing something about it. They’re actively promoting this very same company. That’s utterly unbelievable.

Neither South Street Baptist Church nor the South West Baptist Association have responded to requests for comment.

Here’s a question I want to think about. If you want a counsellor or a psychotherapist, the Professional Standards Authority accredits 11 different registers for you to choose from. Suppose something goes wrong and you need to make a complaint. Do any of those registers handle complaints better than others?

The Professional Standards Authority does ask people to share their experiences of Accredited  Registers, which comes with quite a big caveat.

Please note that this is NOT a complaints process. We do not investigate individuals’ complaints about regulators or registers and cannot resolve them for you, but you can help others by sharing your experience.

So, if you don’t  agree with the decision of an Accredited Register, who do you appeal the decision to? Basically, you can’t appeal it to anyone, which is hardly reassuring. The most the PSA can do is take your concerns into account when it’s time to revalidate the register. By comparison with the statutory regulators (the General Medical Council, Nursing and Midwifery Council etc) the PSA can appeal decisions to the High Court. Possibly this may be a distinction between accredited registers and regulators that hasn’t been discussed enough in debates over whether psychotherapy should be regulated.

I decided to find out whether any of the registers are getting more concerns raised than others. So, I sent the PSA a Freedom of Information Act request asking them to provide a list of how many concerns have been received for each Accredited Register over the last two years. I got this response.

To help interpret the data, I created a table of just those registers that are for counsellors and psychotherapists. These registers vary wildly in size, so I added a column listing the number of registrants each has on their books. If they were all doing equally well, one would expect them to have a number of concerns raised that’s roughly equal when adjusted for the size of the register.

The Association of Christian Counsellors, the National Associaton of Play Therapists, COSCA and the Human Givens Institute all had no concerns sent to the PSA about their complaints handling.

Looking at these numbers, you’d expect the highest number of concerns to be for the BACP, simply because it’s by far the biggest register. But it’s not. The UKCP is only a quarter of the size of the BACP, but they had more concerns raised about them.

From November 2015 to January 2016 the UKCP had its accreditation suspended by the PSA, in part due to apparent mishandling of a sexual misconduct case. I emailed the PSA back to ask how many of these concerns were received before, during or after the suspension. They informed me that 8 of them were before, one of them during, and 2 of them afterwards. I hope this reduction in concerns means their complaint handling has improved since then. However, a quick glance at their complaints decisions page raises an eyebrow or two.

They haven’t sanctioned anyone since last November.

The result for the British Psychoanalytic Council also seems rather striking. They have less than a twentieth of the size of register compared to the BACP, but get almost as many concerns to the PSA. If we restrict it to only those concerns sent by complainants, the numbers are exactly the same.

Arguably the numbers for the Association of Child Psychotherapists could also be considered disproportionate to their size, but it’s only 3 concerns so we’re getting into pretty small numbers there.

Obviously this is a pretty rough-and-ready way to gauge the relative effectiveness of the different registers, but it does raise questions about whether or not they’re doing an equally good job.